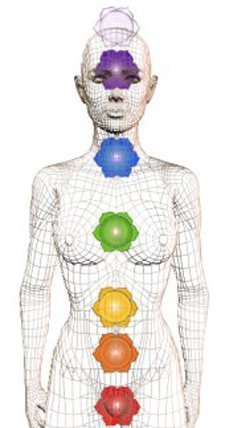 What is the Chakra System?

The word chakra is Sanskrit for wheel or disk and signifies one of seven basic energy centers in the body. Each of these centers correlates to major nerve ganglia branching forth from the spinal column. In addition the chakras also correlate to levels of consciousness, archetypal elements, developmental stages of life, colors, sounds, body functions, and much, much more.

The chakra oil blends were created by Gregory who is not only a Certified Clinical Aromatherapist but he also performs chakra alignments. They are blended in fractionated coconut oil so that they can be applied directly to the skin as an anointing oil. The essential oils chosen for the blends are based on the color and vibration for each chakra. 1/2 ounce (15 ml) bottle with built in euro dropper.

Chakra Seven:
Thought, Universal identity, oriented to self-knowledge
This is the crown chakra that relates to consciousness as pure awareness. It is our connection to
the greater world beyond, to a timeless, spaceless place of all-knowing. When developed, this chakra brings us knowledge, wisdom, understanding, spiritual
connection, and bliss.

Chakra Six:
Light, Archetypal identity, oriented to self-reflection
This chakra is knownas the brow chakra or third eye center. It is related to the act of seeing,
both physically and intuitively. As such it opens our psychic faculties and our understanding of archetypal levels. When healthy it allows us to see clearly,
in effect, letting us “see the big picture.”

Chakra Five:
Sound, Creative identity, oriented to self-expression
This is the chakra located in the throat and is thus related to communication and creativity. Here
we experience the world symbolically through vibration, such as the vibration of sound representing language

Chakra Four:
Air, Social identity,
oriented to self-acceptance
This chakra is called the heart chakra and is the middle chakra in a system of seven. It is related
to love and is the integrator of opposites in the psyche: mind and body, male and female, persona and shadow, ego and unity. A healthy fourth chakra allows
us to love deeply, feel compassion, have a deep sense of peace and centeredness

Chakra Three:
Fire, Ego identity,
oriented to self-definition
This chakra is known as the power chakra, located in the solar plexus. It rules our personal power,
will, and autonomy, as well as our metabolism. When healthy, this chakra brings us energy, effectiveness, spontaneity, and non-dominating power.

Chakra Two:
Water, Emotional
identity, oriented to self-gratification
The second chakra, located in the abdomen, lower back, and sexual organs, is related to the
element water, and to emotions and sexuality. It connects us to others through feeling, desire, sensation, and movement. Ideally this chakra brings us
fluidity and grace, depth of feeling, sexual fulfillment, and the ability to accept change.

Chakra One:
Earth, Physical
identity, oriented to self-preservation
Located at the base of the spine, this chakra forms our foundation. It represents the element earth,
and is therefore related to our survival instincts, and to our sense of grounding and connection to our bodies and the physical plane. Ideally this
chakra brings us health, prosperity, security, and dynamic presence.