One of the oldest traditions in hoodoo is the practice of using lucky numbers. Most people used them for gambling and lottery and numerology books were some of the most popular of the early booklets found among hoodoo supplies in magazines. Learn How to Use Dice for Lucky Numbers & Fortune Telling!

This plan of ascertaining lucky numbers has always been exceedingly popular with those persons who try their fortune at the lottery. The manner of calculating a lucky number is as follows: Take two dice, and after shaking them well in a box, throw them out, being careful to note the whole number of spots on the uppermost sides of the dice, then repeat this operation and again mark down the number of spots as before. Having done this, you then consult the annexed table and find the number of your first throw, then follow the line down until you arrive at the number corresponding with your second throw on the opposite side of the table.

For example, we will suppose you throw the first time, and the number of spots is equal to 4. You must then look at the top of the line and find the Roman numeral IV. You throw the second time and get 7 spots; this you will find on the outside column, at the left hand, marked VII. Then all you have to do is to place your finger on the IV. at the top of the table and follow the line down until you arrive at VII.94 on the opposite side of the table, thus you will find the number 43, which is the lucky number. Should you come to a cypher (0) you must throw again. By following these simple directions you can get as many good numbers as you wish to play. 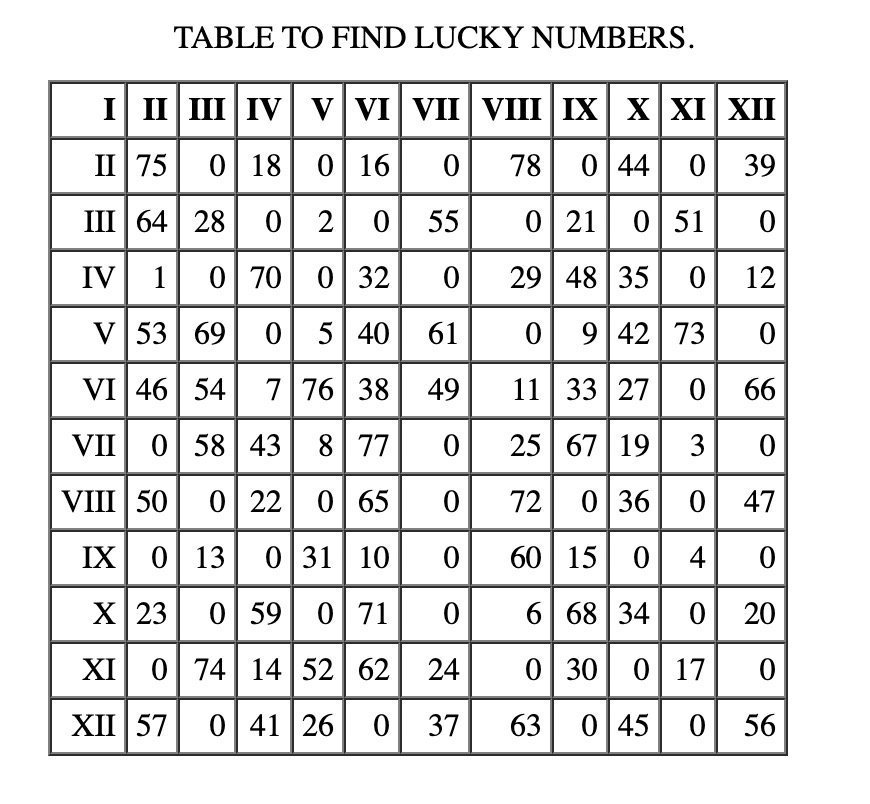 How to win a lottery:

This is a certain and innocent way of finding out common occurrences about to take place. Take three dice, shake them well in the box with your left hand, and then cast them out on a board or table, on which you have previously drawn a circle with chalk.

Five.—A stranger who will prove a friend.

Eleven.—A death that concerns you.

Fourteen.—Beware that you are not drawn into some trouble or plot by a secret enemy.

Seventeen.—You will either be on the water or have dealings with those belonging to it, to your advantage.

Eighteen.—A great profit, rise in life, or some most desirable good will happen almost immediately; for the answers to the dice are always fulfilled within nine days. To show the same number twice at one trial, portends news from abroad, be the number what it may. If the dice roll over the circle, the number thrown goes for nothing, but the occurrence shows sharp words; and if they fall to the floor, it is blows. In throwing out the dice, if one remains on top of the other, it is a present of which I would have them take care.