The Green Man – Celebrating and Honoring the Greenman

By aromagregoryGods and Goddesses, celtic and pagan, witchcraft and Wicca

The Green Man – Celebrating and Honoring the Greenman

Who is the Green Man?

The Green Man is a powerful nature deity. Worshipers have been paying homage to him for centuries, even millennia. He seems to have been around from when the first plants grew on Earth, and he was there when life began crawling out of the seas four billion years ago. It is unclear exactly how long humans have worshiped this deity, but we know that offerings were made to him in Britain during Roman times. He is a symbol often seen in architecture and design.

The Symbol of the Greenman 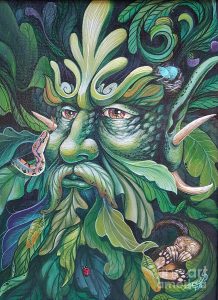 The Green Man symbolizes seasonal renewal and ecological awareness for many modern Pagans. He can take many forms, such as naturalistic or decorative carvings, with the simplest depicting a man’s face peeking out from amongst foliage-adorned branches onto which he has grown a beard made up mostly of leaves. Some examples show him wearing clothes made entirely of vines. In Europe, there is a long tradition of carving green men onto Christian churches. One example can be found in Cyprus where seven men are carved on the facade of St Nicholas Church during thirteenth-century renovations to create an emotional link between Saint Nicodemus and his flock through this fertility symbol. In Wicca, he’s often used to represent the Horned God – which incorporates aspects from Celtic Cernunnos or Greek Pan, among others. 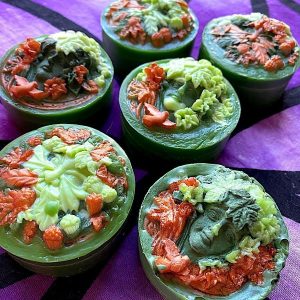 There is an old English folk custom called Jack in the Green, which was a part of May Day celebrations. Developed during the 18th century, a wicker or wooden cage-like frame was created to be worn then covered in greenery so that the wearer could dance about at the front of the parade to celebrate the day. It would have appeared more like a bush or tree than what we might think of as a Green man costume. It was a development from an earlier custom where milkmaids would adorn their buckets with flowers and greenery for the time of Beltane (May Day.) Later, this greenery was worn as masks until finally the Jack o’ the Green tradition emerged. In a 1939 article by Julie Somerset (aka Lady Raglan), it was proposed that the Jack in the Green was associated with the depictions of the green man found on medieval churches. Founded in 2003, There is an annual Green Man Festival that celebrates science, music, and the arts, and is held every August in Brecon Beacon, Wales.

One may debate whether or not this deity is truly one entity or if it’s actually many different beings who share a common bond through their ties to plant life. However, we can agree that anyone who pays homage to the Greenman strongly attaches to nature. Today the world over, people still celebrate their respect for his power by building monuments in his image and making offerings to him.

How to Worship and Make Offerings to the Greenman

Worship of The Green Man is easy and practical for today’s busy world. Anyone can take time out of their routine to show their love and respect for this deity. They need only meditate on images of him or images with symbols representing his powers and offer thanks and praise where thanks and praise are due. Here we shall discuss just how one might go about paying homage to the Green Man, beginning with offerings:

One very simple way to honor The Green Man would be to place an offering close by while you take a walk outside (or at least away from your home). While walking, pick up anything green such as a leaf, blade of grass, weed, etc. Place this in a pocket or bag with an apple or some other food item that is living and green. When you return home from your walk, take the offerings out of your pocket or bag and place them in a bowl or basket on your altar, where you pay homage to The Green Man. Burn incense over the offerings while thanking him for the revelry he provides us by allowing us access to his wisdom through nature. Afterward, simply eat what is left over of the offerings as they are now blessed offerings to The Green Man. You can use essential oils or incense as offerings to the Green Man. Essential oils & incense associated with the Green Man are vetiver, cinnamon, sweet birch, oakmoss, and patchouli.

Another way one might make offerings is by going into their backyard alone at night after everyone else has gone to bed, turning off all artificial lighting (save for your offerings), and placing offerings in the grass or on a shrub. One might place offerings of flowers, leaves, fruit, fresh herbs, etc., anywhere they please, but a common space to do this would be an outdoor altar one might construct for this specific purpose (and decorate it with all things green).

You may also wish to pick a large tree that seems strong and sturdy and climb up into it enough to find yourself surrounded by vines and branches. Place offerings here while seeking The Green Man’s wisdom regarding any worries you have been having lately. Afterward, give thanks to him for his time and inspiration through nature before coming down from the tree or taking offerings back home with you. Some people honor him by planting a tree.

Another common practice is to make offerings to The Green Man, starting with the new moon each month. Fill up a vase or jar with spring water and add several drops of wine (or liquid representations of blood such as red juices). Add offerings such as fresh fruit, seasonal herbs, flowers, etc. Pull back the curtains in your home so that there is no darkness for at least four feet all around you. Stand in front of this open area with offerings in hand while naming things you are grateful for. Afterward, thank The Green Man for his time and pay homage to him before placing offerings outside under a tree or shrub where animals and insects can properly enjoy them.

original artwork of the Greenman by Nashville artist.

An easy, readymade way to honor the Green Man is to light up one of our Green Man candles. It’s a perfect way to pay respect to his power and influence. Or, consider anointing your body (i.e. wrists, forehead, neck) with our Green Man oil.

There is an interesting article from the New Yorker titled, The Remarkable Persistence of the Green Man.